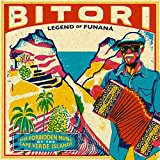 The Forbidden Music of the Cape Verde Islands! From these small islands, 200 miles off the coast of West Africa, here is the accordion-based funana music of the working classes, banned under Portuguese colonial rule for decades, but resurgent after independence in 1975 and finally recorded in 1997 by the great funana master Bitori & an excellent younger vocalist, Chando Graciosa,. And now, presented to the world for the first time in this re-release of what was until now just a local record.