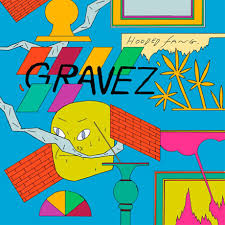 Canadian four-piece Hooded Fang explore the boundaries between fantasy and reality on Gravez, the follow-up to their 2012 debut Tosta Mista. The album fuses many of the band’s influences including surf guitar, psychedelia and go-go into a mind-bending record that in the band’s words, “may refer to the impending lurk of death.” Tracks like the bluesy “Genes” showcase this disillusionment with the future, whereas “Graves” and “Ode to Subterrania” show the band’s mastery of high-energy and catchy garage punk that reflects the band’s kinetic live show. Above all, Gravez is an album that illustrates Hooded Fang’s mastery of raw yet wildly inventive pop gems.
play: 2, 3, 6, 7
FCC: #5
RIYL: JAILL, PARLOVR